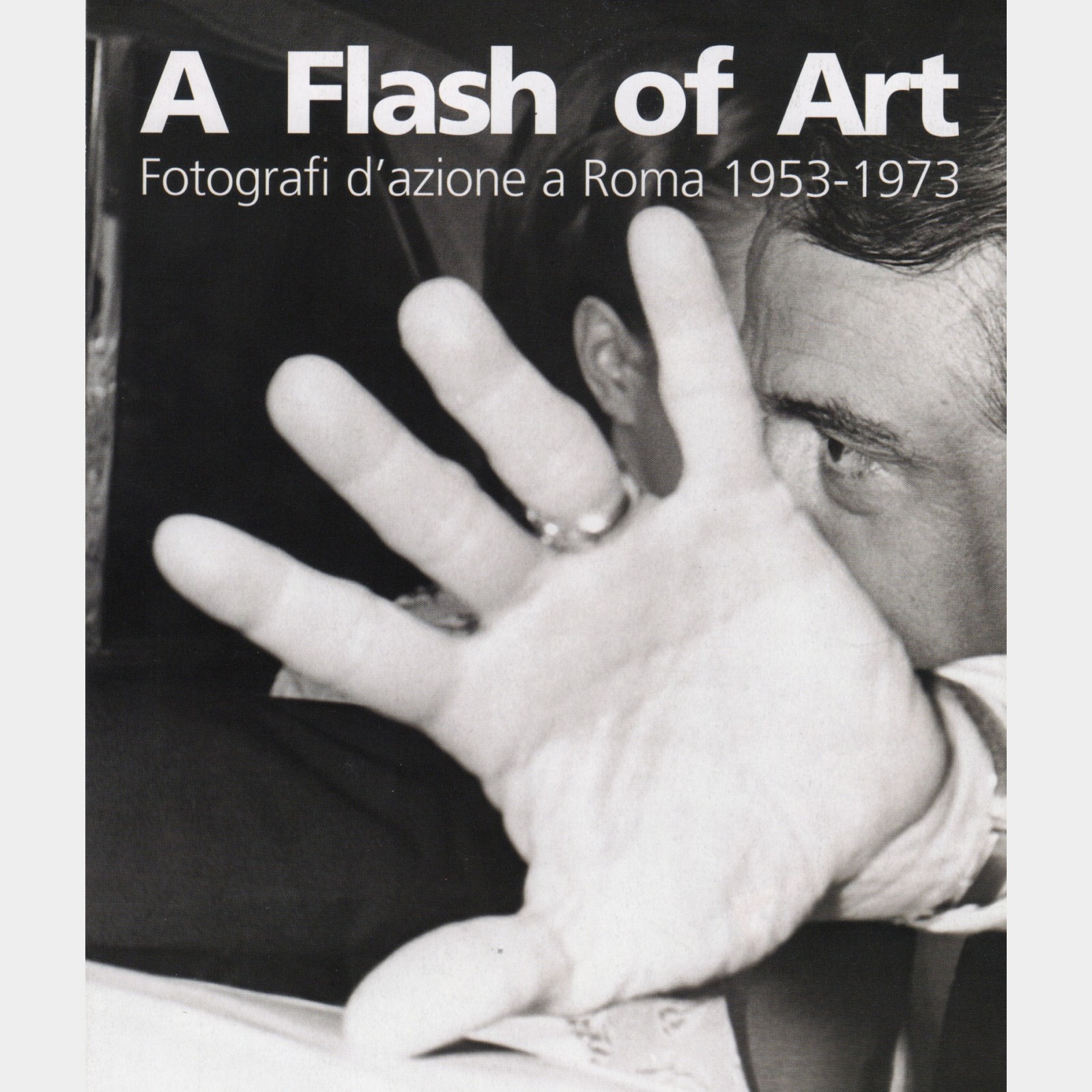 A FLASH OF ART

The show A Flash of Art – Action Photography in Rome 1953-1973, is curated by Achille Bonito Oliva and features other critical apparatus such as original audio interviews with photographers, a video project realized in collaboration with Istituto Luce Cinecittà and video installations within the exhibition space by Alessandro Amaducci. Photology has been travelling this show for the first time in 2003 to the Moscow House of Photography and in 2004 to Palazzo Venezia in Rome. The catalogue A Flash Of Art – Action Photography in Rome 1953-1973, published in 2004, contains extensive texts by Bonito Oliva and Davide Faccioli. 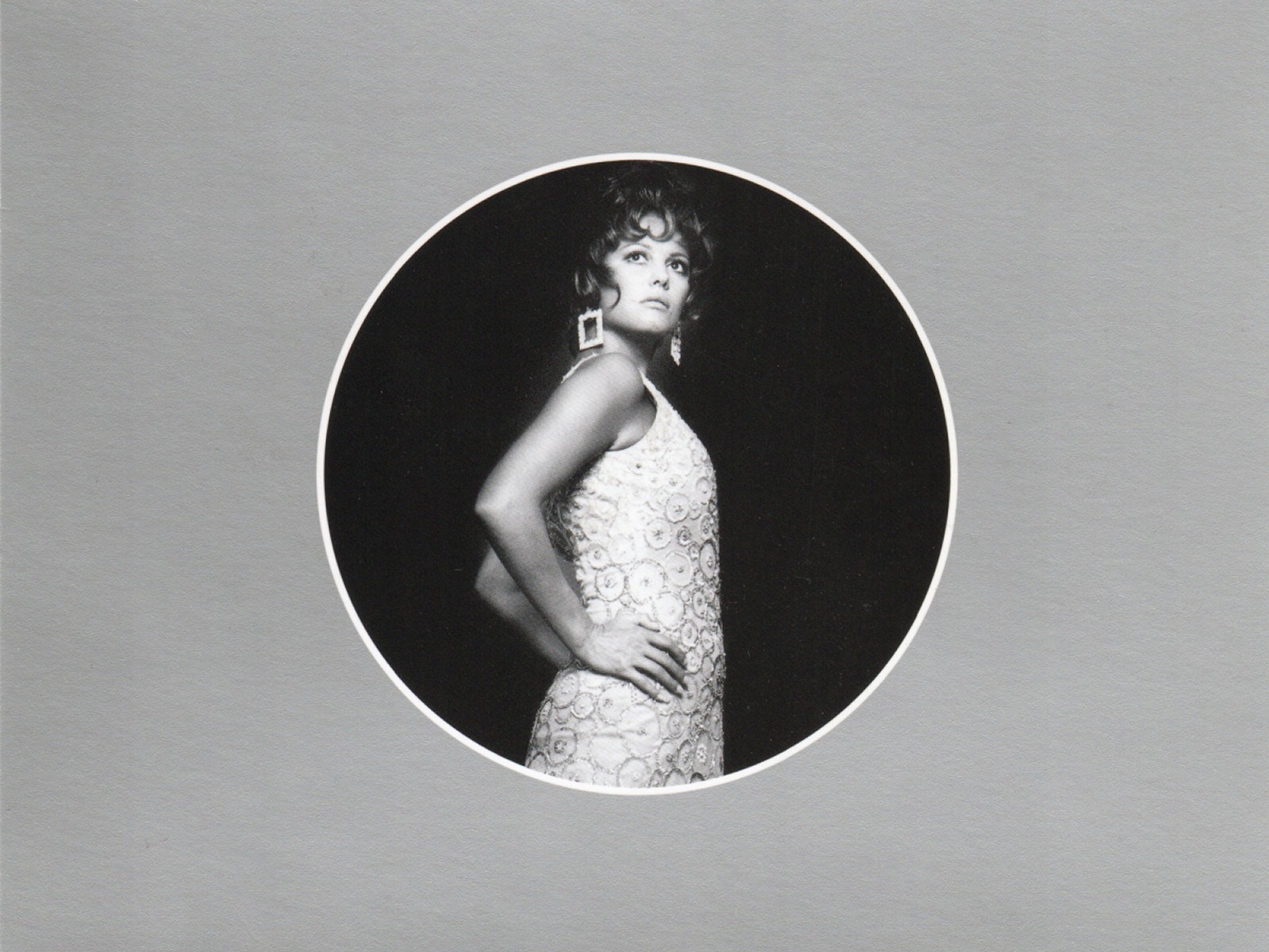 Claudia Cardinale was born in 1938 in Tunis, Tunisia. As soon as she moved to Italy she became one of the most celebrated Italian actresses reaching an international fame. Throughout the 1960s, she appeared in some of the most acclaimed Italian and European films of the period such as Il Gattopardo by Visconti, 8 ½ by Fellini and Once upon a time in the West by Leone. Alberto Moravia, a key figure within the Twentieth Century Italian cultural scene, was soon intrigued by this new sexy icon and in 1962 decided to write a text on her under the form of a dialogue, published in the same year by Esquire.

The dialogue (almost an interview) is a maniacal, description of every detail of Claudia Cardinale’s body, from the tip of her hair to the bottom of her heel. Photology re-published in 2003 the original text, packaged in a limited edition under the title Claudia Cardinale Alberto Moravia. Dialogo e Fotografie, enriched by photo-portraits by Chiara Samugheo, Tazio Secchiaroli, Pierluigi Pratulon, Federico Garolla and her sister Blanche. Every silver book-case can be used as a self-standing frame and each book is hand-signed and numbered by Claudia Cardinale. Initially the book was launched throughout Italy by a series of presentations and shows (Milano, Florence, Bologna) with the special participation of Claudia Cardinale in person. 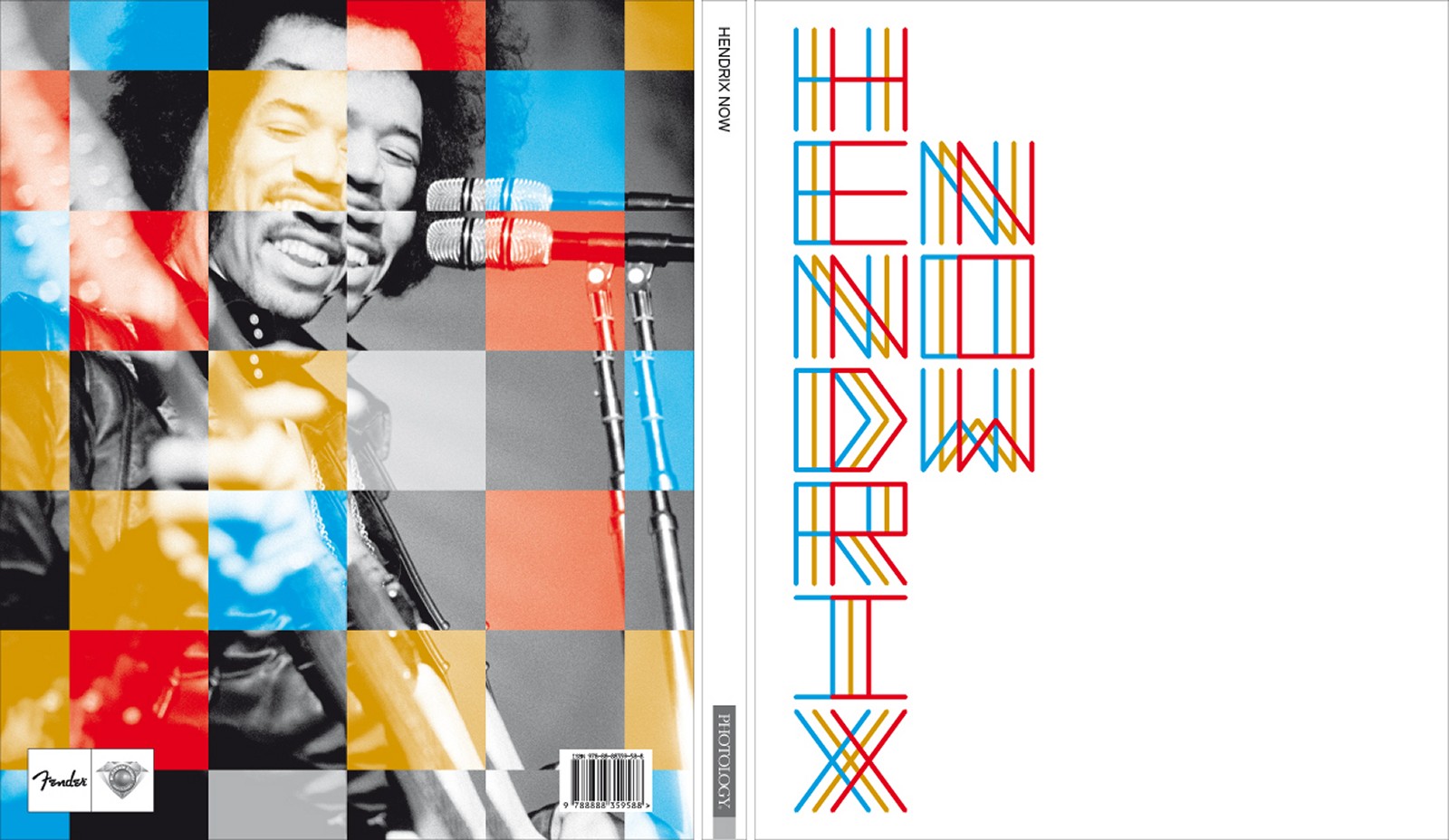 Hendrix Now, a book and an exhibition entirely dedicated to rock legend Jimi Hendrix with photographs by Baron Wolman, Jorgen Angel, David Redfern and Gianfranco Gorgoni, plus a video installation by Alessandro Amaducci. On 18 september 1970 Jimi Hendrix died in London and he’s now unanimously considered the greatest guitar player of all time. His legend and his timeless music has continued to gather fans all around the world, generation after generation. Hendrix is celebrated by Photology, exactly forty years after his death, with a wonderful collection of more than 50 photographs.

Hendrix Now is an homage to the man who changed the history of rock, becoming an icon of social and cultural revolution of the fabolous Sixties. The selection of pictures was originally taken between 1968 and 1970, when Hendrix turned the world of music around, establishing himself internationally with live performances in festivals and concerts around the world: San Francisco, New York, London, Woodstock… For the occasion a book was produced by Photology and curated by Nico Vascellari, one of the most affluent emerging Italian artist. Vascellari designed a wonderful hard-cover publication featuring not only interviews with important contemporary musicians but also photographs made by digital contaminations of his internet works. In 2015, the same exhibition has taken new life at the Slowear Store in Paris. 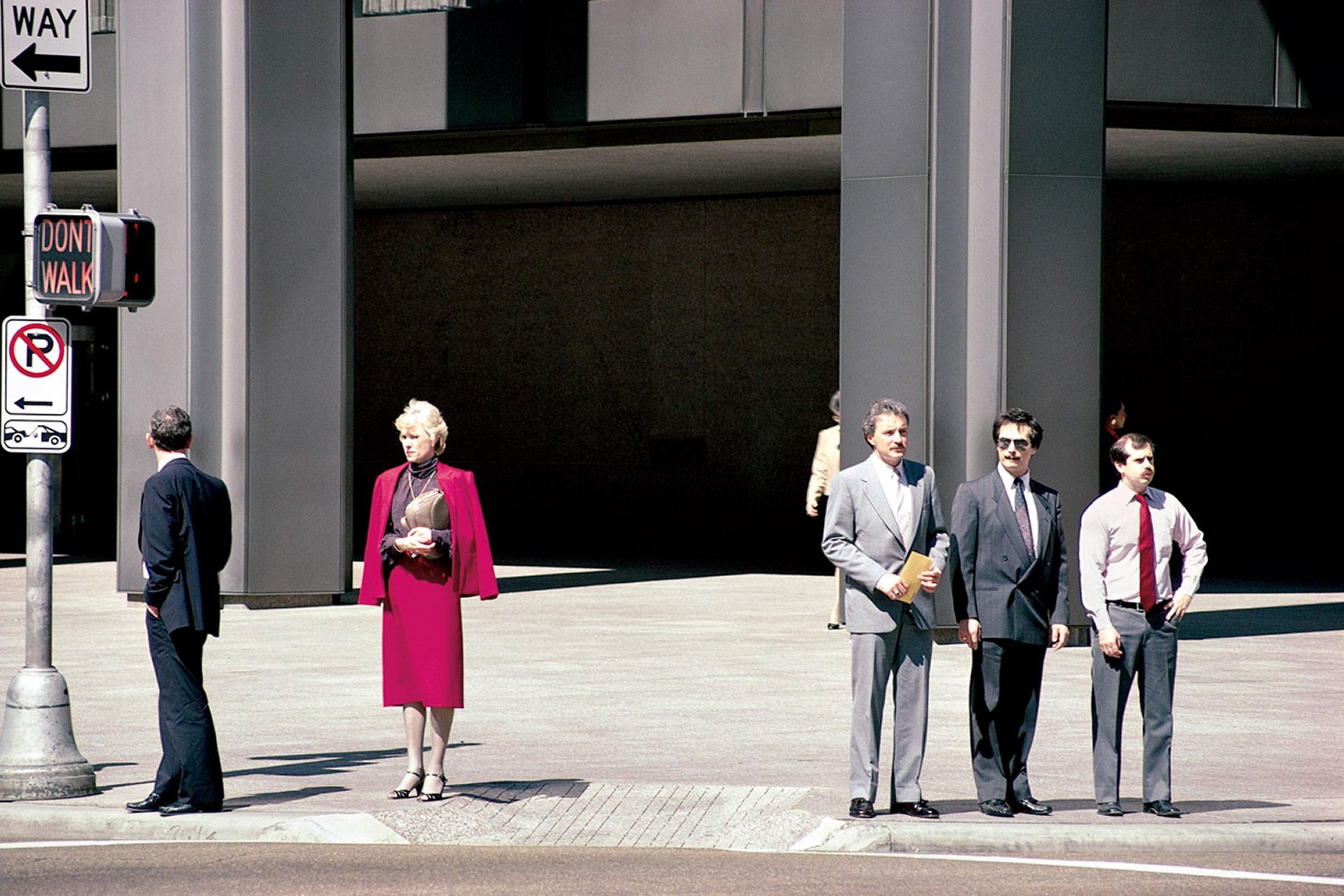 The exhibition features the works of various photo-artists such as Luca Campigotto, Gregory Crewdson, Richard Tuschman, Franco Fontana and Erwin Olaf. Thru a total of about 30 works they compare themselves with the iconography of Edward Hopper, whose painting has inspired millions of people worldwide. The psycoanalitic painting of Hopper perfectly depicts the social contradictions of contemporary America. Living photoartists more and more use Hopper style and moods in order to emottionally hit the viewer and the examples of Hopperiana are here to underline the concept. For example Campigotto with his serie of Gotham City melts his unique skill of night photography with typical Hopper outdoor croppings. Crewdson cinematographic scenes creates misterious enigmas and psychotic ambiguities. Tuschman’s pictorial imagery brings powerful Hopperian human figures in a contemporary context. As Daniele Galliano writes for Photology “Edward Hopper images become an archetype of this esthetic to the point it gets really difficult to determine the border between artist’s interpretation and the reality of every day life”. The exhibition features different framed size works from Polaroids (Fontana) to 50 x 70 cm (Tuschman and Olaf), 110 x 140 cm (Campigotto) and 150 x 200 (Crewdson). 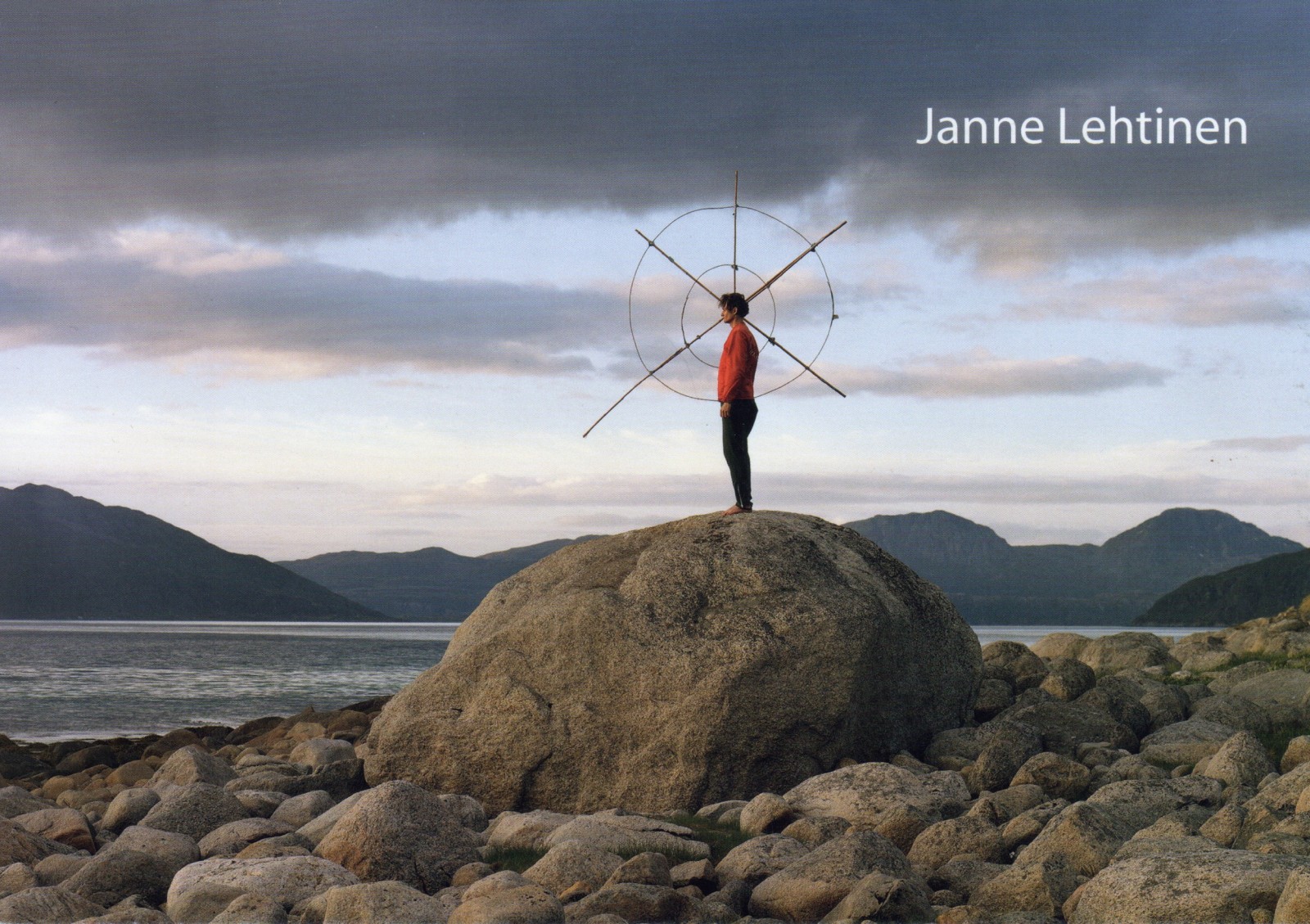 Landscape is the classic scenario for Finnish photography. The In Natura – A Finnish Trilogy project features photoworks by artists from the Helsinki School: Ilkka Halso, Janne Lehtinen and Jorma Puranen. In Natura focuses on Finnish performance and installation contemporary art under three different perspectives, but always with the same stage: Nature. Ilkka Halso, builds his restoration structures around natural elements such as grass, trees and flowers, which become wounded bodies to be healed. Janne Lehtinen’s performances are set in Lapland, attempting impossible takehealed offs from rocks and boards in the great outdoors. Overwhelmed by a pictorialist state of mind, Jorma Puranen, reproduces Finnish woods and lakes through reflections on a painted wooden surface. The tradition of the masters of painting are regenerated by an up to date conceptual action. In Natura was conceived as a show, later, with the support of Frame (Finish Fund for Artists), became a large format edition published by Photology in 2008 and culturally enriched by young radical curator Gianluca Marziani. 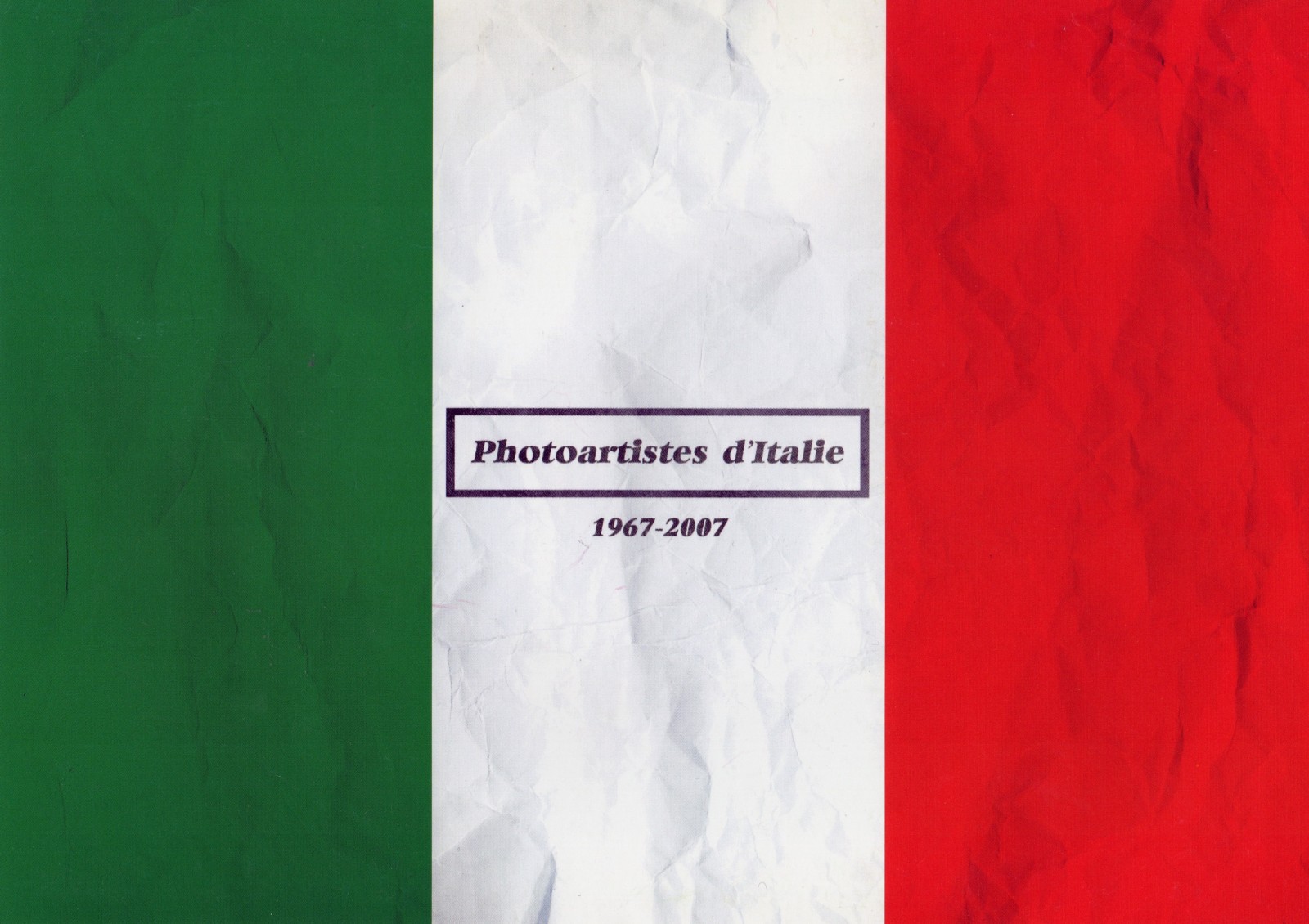 “Photography by nature is a technical medium able to document reality and art in a statistic way. It is an objective and pure media made to read the visual and narrative  essence of conceptual art”. These words by Achille Bonito Oliva are the basic theorem of Italian Photoartists, a group show which he curated and promoted since 2007. The show puts together Italian artists who used the medium of Photography for more than 40 years. Michelangelo Pistoletto, Giuseppe Penone, Francesco Clemente since the early 60’s freely use cameras as non-aware photographers. Luigi Ontani, Ettore Sottsass, Claudio Abate, adapt their visions to the new wave of performance, installation, land and body art which generated in the 70’s. At the same time Franco Vaccari, Luigi Ghirri, Ugo Mulas are starting to impose photography as a pure expression of art in which the printing process is as important as the conceptual quality of the image itself. The supremacy of Photo-art in the contemporary market is made clear by the global success of Italian art icons such as Vanessa Beecroft, Maurizio Cattelan, Francesco Vezzoli. Photography is no longer a way to look, but the most updated way to think. The show includes also works by Loris Cecchini, Mario Giacomelli, Mario Schifano, Paul Thuile and many more. 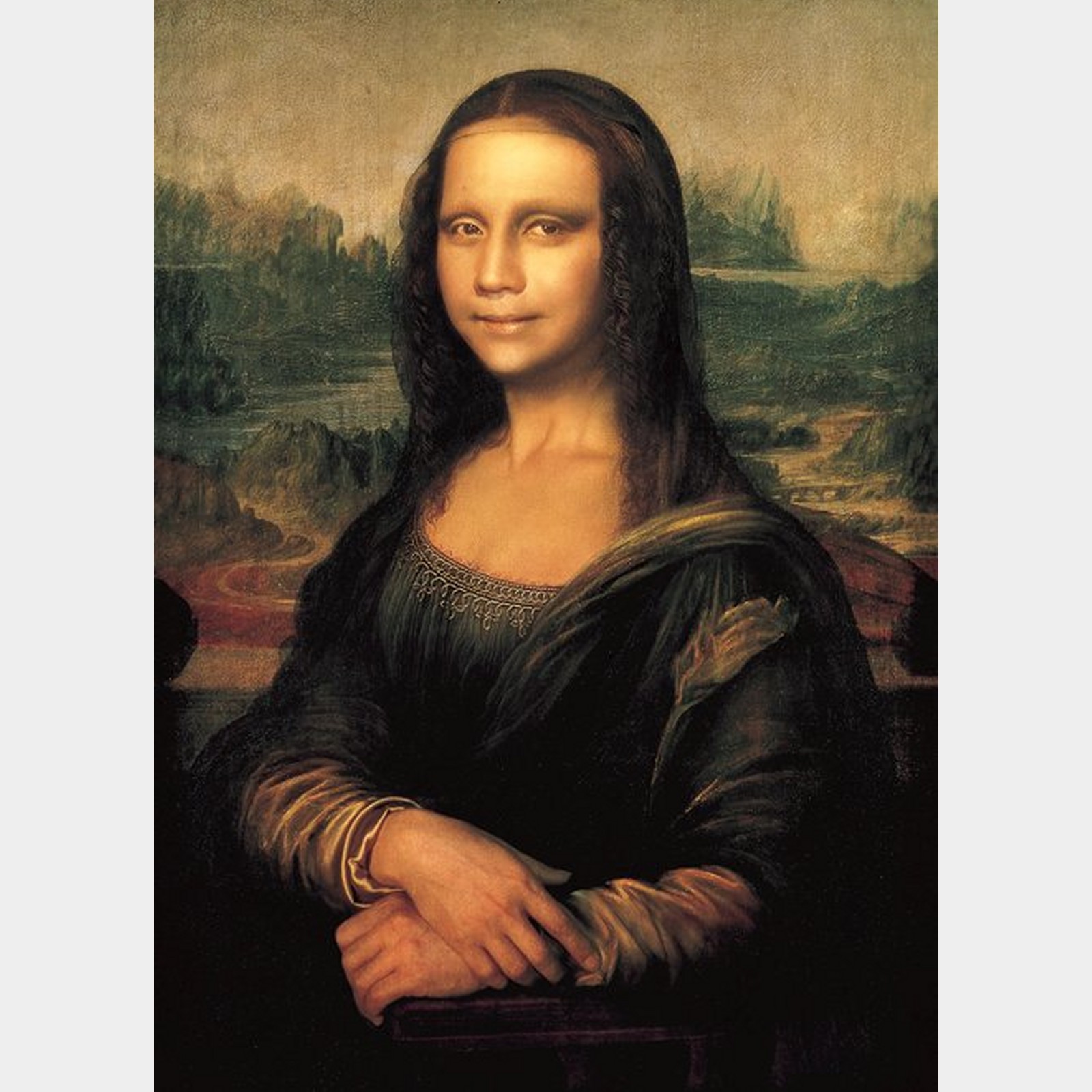 The idea of this exhibition came after visiting the Leonardo da Vinci show at Venaria Reale in Torino in 2011. That exhibition had a beautiful section of contemporary artists interpretating various works by Leonardo, but no references to Mona Lisa were included. The title puts attention to the ambiguity of the original painting of the Louvre, an ambiguity which we find in the conceptual works selected for the show: Mario Cresci, Francesco Acerbis, Mario Schifano, Yasumasa Morimura, Vik Muniz, Eef Bongers, Andrea Jemolo, each artist developed a personal controversial version of La Gioconda. The viewer is brought into a different vision which stands between illusion and reality in an perceptive lightness for each contemporary work.

The show has been curated by Davide Faccioli and Fabiola Naldi who wrote, in a very interesting essay “We may say in that smile we find a great part of the conceptual path of the most recent contemporary art, a sort of open space, ephemeral in its own vision, although of keen importance in describing the power of art of the twentieth century”.

The show has been travelling to Photology Milano (2012) and to Palazzo Nicolaci in Noto (2014). 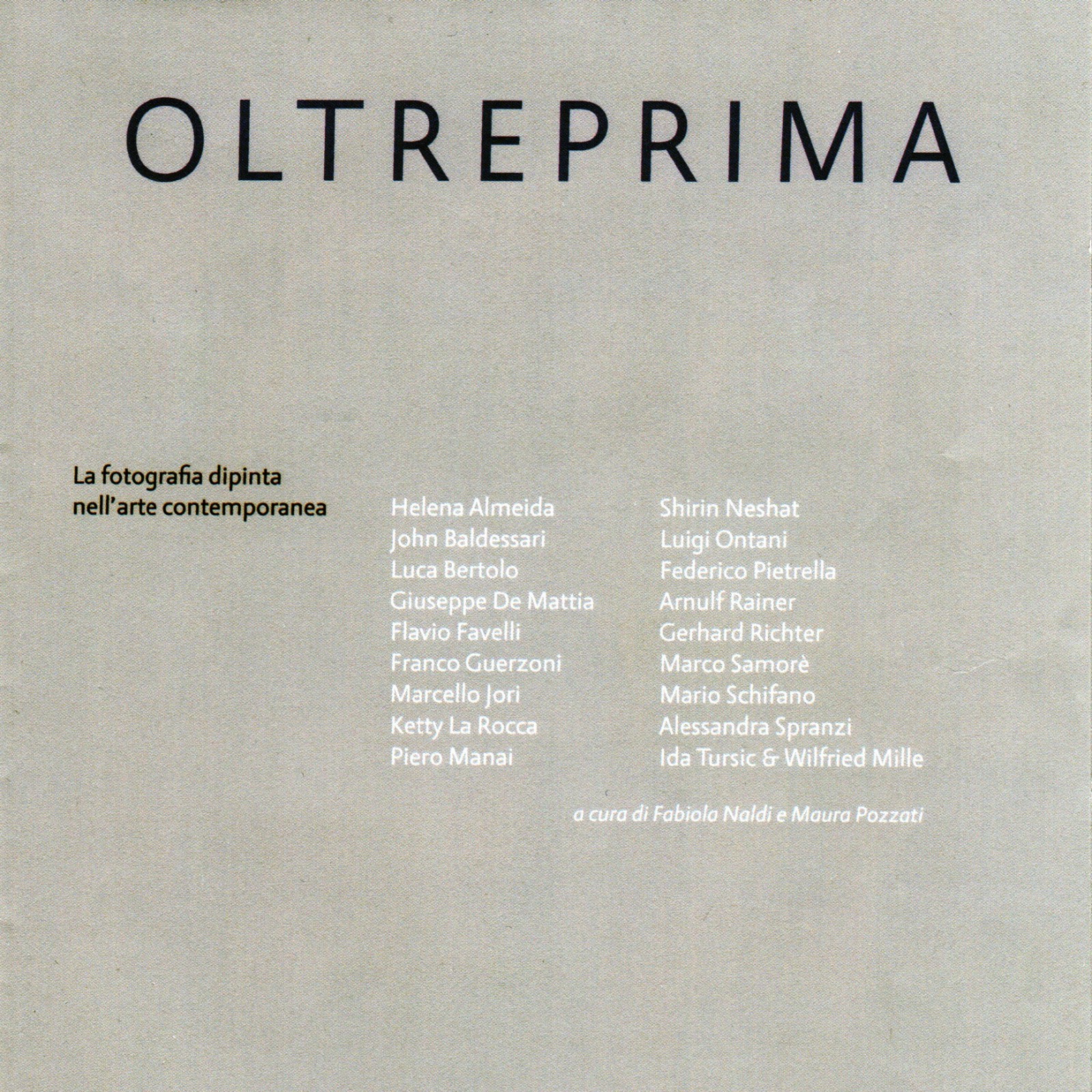 Overpainted photography in contemporary art as a subtitle of this show perfectly describe this unique, exclusive, suprising exhibition. originally conceived by Photology as a selection of classic works and artists, oltreprima has been later re-curated by Italian curators Fabiola Naldi and Maura Pozzati both based in Bologna.

The show featuring painted and inscribed works by Almeida, baldessari, Favelli, Guerzoni, La Rocca, Neshat, Ontani, Rainer, Richter, Schifano (and many more) has been hosted by Fondazione del Monte during the 2017 edition of Artefiera Bologna.

A catalogue was published by Photology for the occasion which contains more than 35 illustrated works with an extensive chronology of overpainted photography starting from 1915. 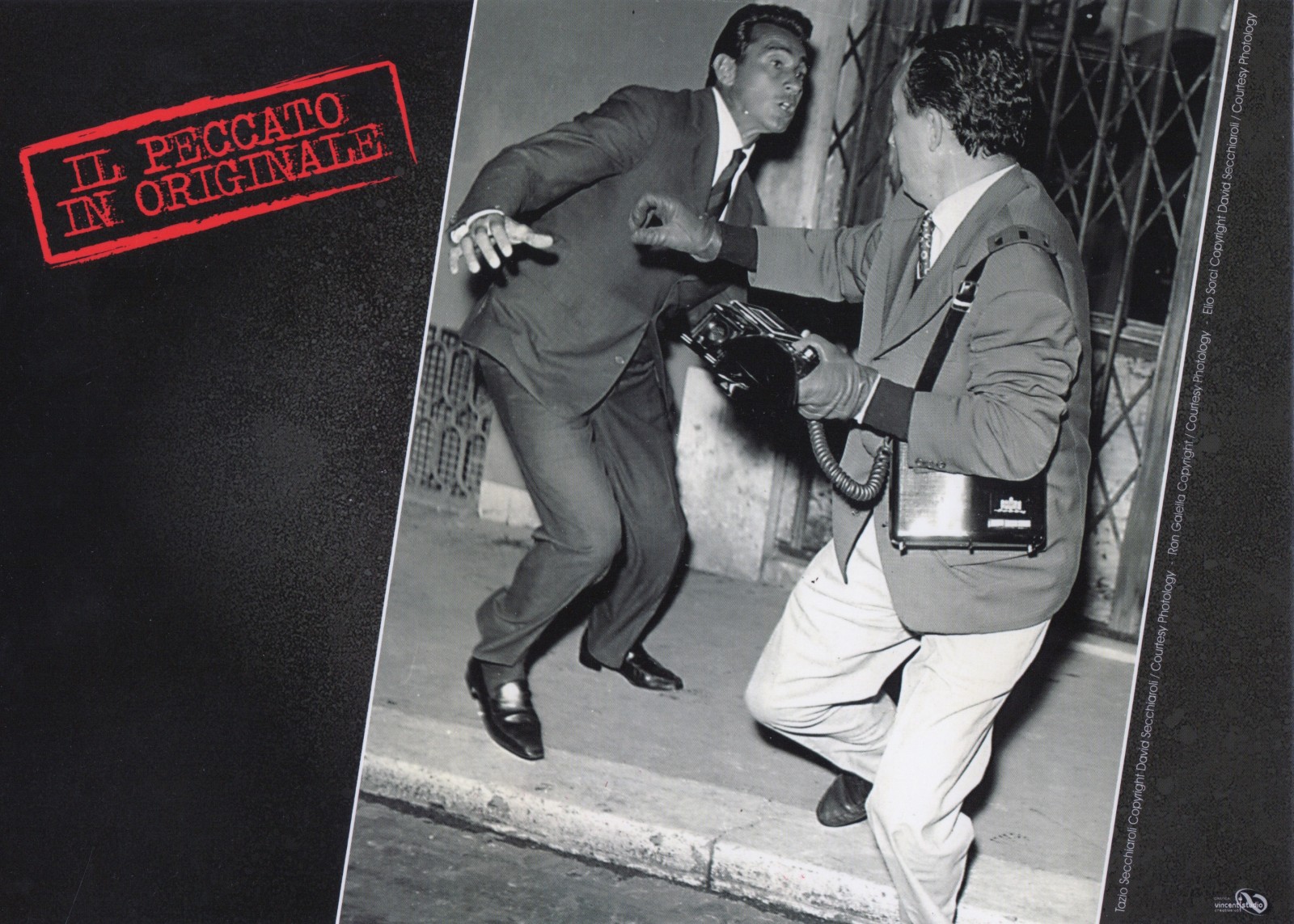 The show features more than 150 vintage labeled prints originated from each photo-agency or artists’ studio. Between 1997 and 2017 the exhibition travelled to Paris, Bologna, London, Piacenza and Parma in public and private institutions. 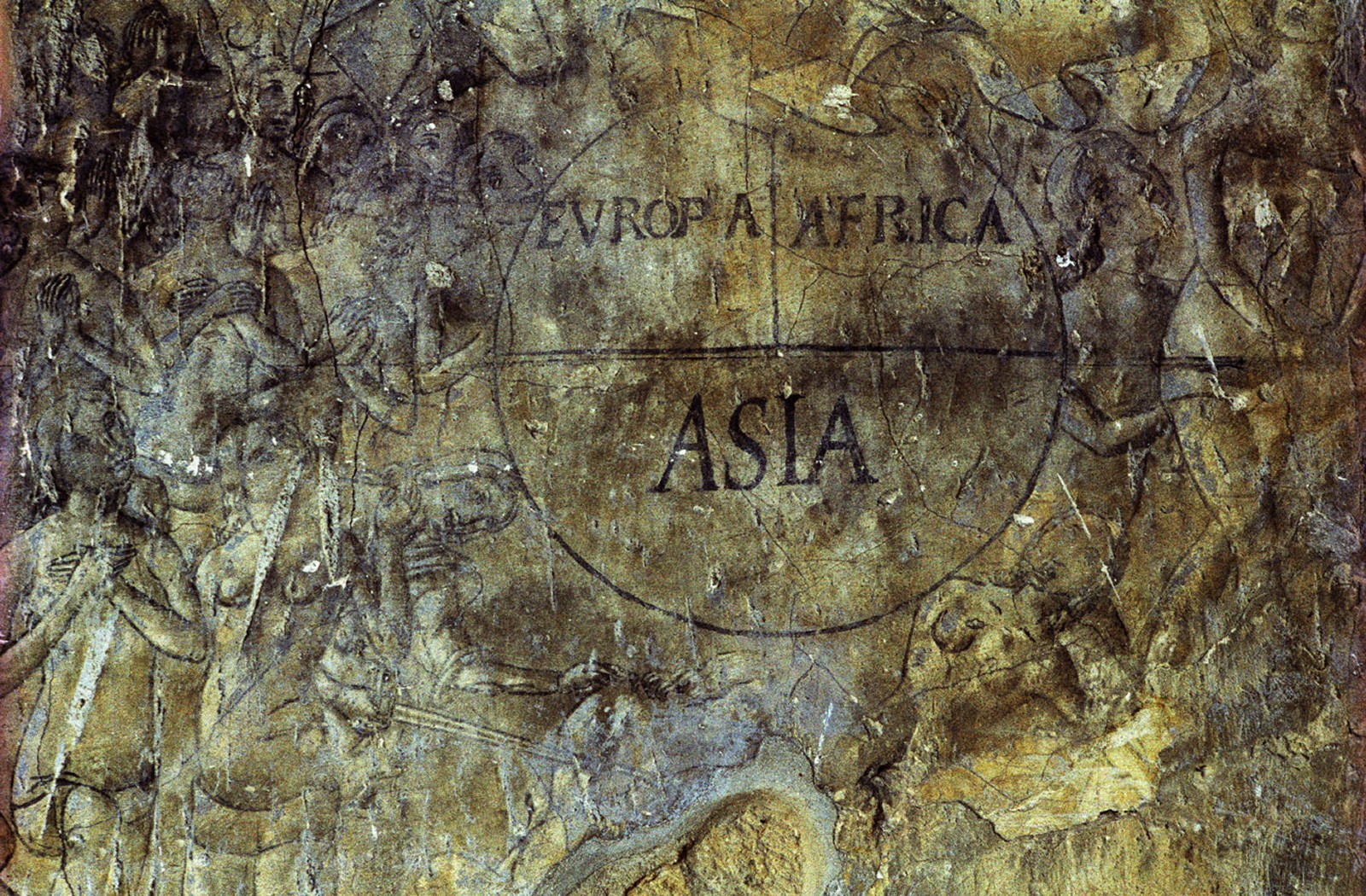 The exhibition SI.C.( )L.A. > “Sicily as land art” aims to represent the big heritage of “elements” left by different population in 3000 years on our territory through the work of 5  different artists: Mario Cresci, Elia Festa, Andrea Jemolo, Anni Leppälä, Ettore Sottsass. Defined as a group show, the exhibit could also be considered as a set of indipendent solo exhibition projects given the intensity, depth and diversity of the selected works. While Sottsass deals with the issue of land art seeing the mere territory as art itself, Cresci is interested in small details and in his interventions on parts of nature such rocks, sand, or cactuses. Jemolo moves our vision to the most contemporary area in Sicily, Gibellina, among architectural structures and site specific project by Ludovico Quaroni and Burri in memory of the Belice Earthquake of 1968. Anni Leppala, uses the natural landscape of The Noto Valley and Madonie in order to stage her version of “Alice in wonderland”, where she transforms Land Art in a vivid, contemporary breathing representation. Through his  big intsallation, Elia Festa brings himself into a new category of a refined ready-made artist, with his “This memory I would like to tell” made of 99 photographic “post-card” of architectural remains of the Greek- Roman culture, happening in recent years after a long travelling research. Finally , a special appearance by Sebastian Kruger with his 2003 video reissued for the occasion in 2015 that illustrates the artistic adventures of Antonio Presti a real example as a contemporary Sicilian art entreprenour. 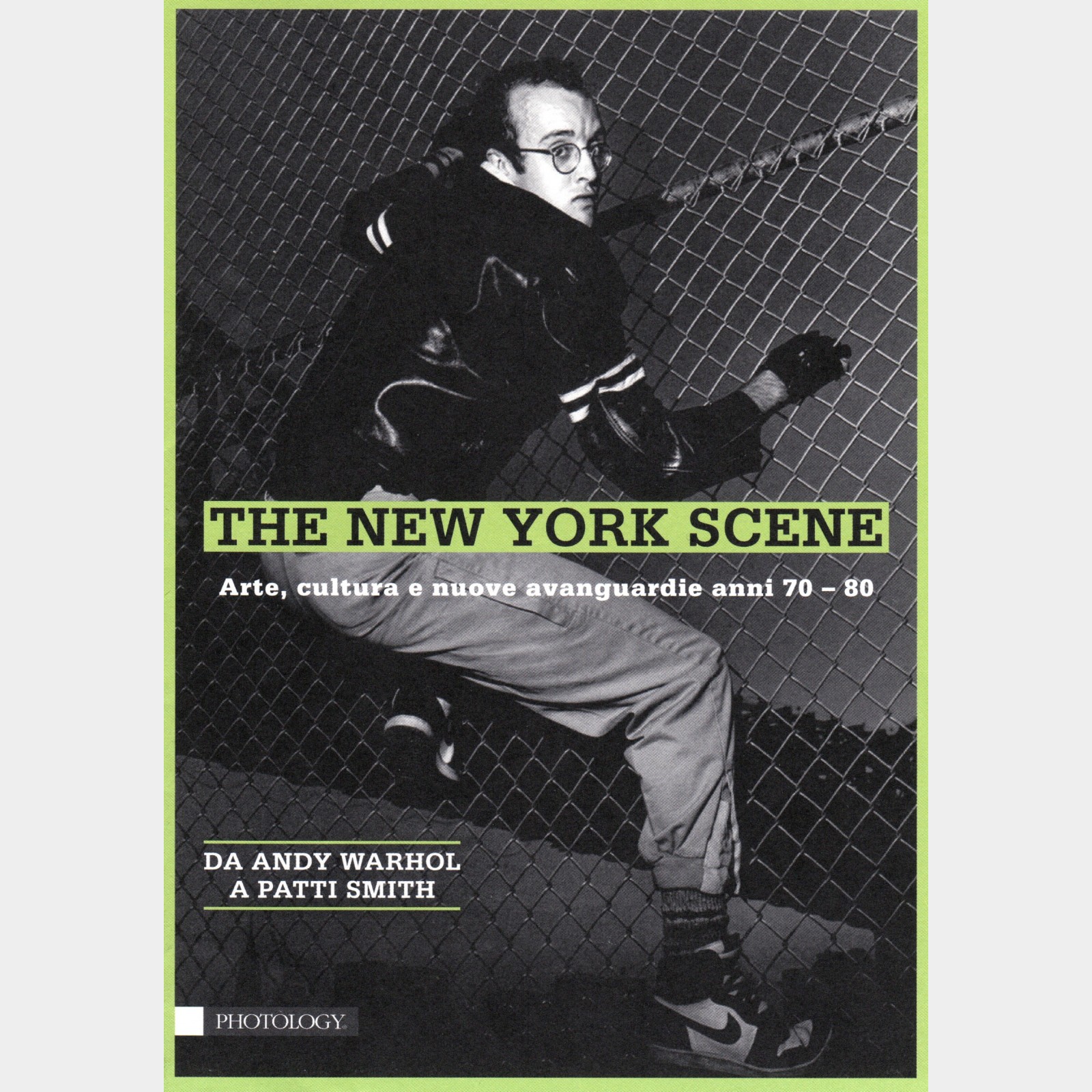 Since the 1970’s New York becomes the world capital of contemporary art and the deep economic success of Pop Art makes avant-gard artists to be the most requested among rich tycoons of the City. This is becoming a changing world: the one of global culture and mass snobbisnesh, with a society without middle class. It is the new hedonist America of Ronald Reagan what is going to happen in few years: a social system which corresponds to the mass market. New York is in pole position in this new cultural system, plunged in a downtown-uptown sliding effect where hi-class falls in love with underground artistic sense and avantgard young generations get a living with wasp dollars. It is the time for new cultural experiences: Beat literature, pop music, gay culture, art events, disco extravaganzas. What has happened in New York in those 20 years is the most extreme social change in life style and thinking ever happened in contemporary society.

The show was premiered at Photology Milano in 2009 and later was extended to about 200 works including vintage films and video for a major retrospective at Palazzo del Governatore in Parma in 2017.